Books are a helpful way of allowing children to learn about themselves and others.  Epilepsy New Zealand have published a book called Because You Are My Friend which is available upon request. 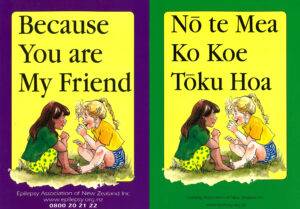 This reading list is filled with books that have been selected as suitable reading for children of all ages.
The books cover a range of subjects related to living with epilepsy, enabling your child, siblings and friends to learn about epilepsy through stories that they can relate to.

If you come across any other books that you think should be included, please let us know!

Ariana and Jack By Sharon Holt, illustrated by Claudia Gadotti

The Adventures of Buzz Bee by Jacqueline Ann Gibson (2015)

Is Epilepsy Contagious? by Julie Devinsky (2011)

My Seizure Dog by Evan Moss

I Have Epilepsy. It Doesn’t Have Me by Jamie Bacigalupo and Judy Bacigalupo (2012)

Can I tell you about epilepsy? A guide for friends, family and professionals by Kate Lambert (2012)

Mommy, I Feel Funny! A Child’s Experience with Epilepsy by Danielle M. Rocheford (2009)

Being Sara by Christopher Passudetti (2009)

Let’s Learn with Teddy about Epilepsy by Dr. Yvonne Zelenka (2008)

Taking Seizure Disorders to School: A Story About Epilepsy (Special Kids in School) by Kim Gosselin (2001)

Becky the Brave: A Story about Epilepsy by Laura Lears (2002)

And Down Went Poss by Anne Little

My Mum Has Epilepsy online story

My Dad Has Epilepsy online story